Review of HOTOSM and MapSwipe

I was extremely enthusiastic at this task which we were presented with during one of our DH lectures. We were introduced initially to the ideas behind MapSwipe which I was very intrigued to learn about. I downloaded the app almost immediately and began to go through the processes involved as a new user. It was a tool which I had never used before so tried to learn as much as possible, as quickly as possible. The design of the app I found to be very user friendly and although I consider myself digitally literate I would have no doubt that someone who wouldn’t be as exposed to digital life as much as I have been, would still have no problems in becoming familiar with the designs and features of the app.

Initially when you launch the app you’re greeted with images and messages explaining very simply the purpose of the app, alongside a quick introduction of the responsibility you have gained as a new user. The first image pops up with text reading “You receive groups of satellite images from vulnerable areas” outlining what to expect as you start your MapSwipe journey. Then swiping left you are shown another image with the text “The data helps organisations coordinate humanitarian efforts in the places you map” giving you an understanding of the purpose of the app. Then lastly a third image with the text “Mapping has already helped save lives. Are you ready to become a mobile volunteer?” motivating me as a user to start my experience using Mapswipe. 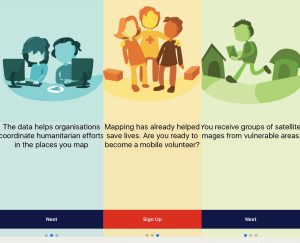 Then I was given a choice of three tiles each containing an area which “needs mapping”. I chose “Nigeria for MSF 4” and was then given clear and concise instructions as to what to do next. I tapped the tile which brought me to a more in depth tutorial to gather as much information as possible and ensure my knowledge as a user was as thorough as possible. The tutorial explained the different types of buildings you’re able to see from the satellite images, the different roads and how to spot them as well as rivers and river beds. I found the tutorial extremely valuable and found myself returning to it frequently as I continued using the app.

Over the next few weeks I mapped all types of areas and found myself becoming more and more comfortable using the app. To be honest I enjoyed using it so much I started to spend long periods of time on it treating it almost like a gaming app! It is so simple and easy to use with fantastic user friendly features which undoubtedly helped to keep me as a user, extremely interested and interactive. The idea behind MapSwipe is incredible and personally I am so impressed by how brilliantly it was designed. It’s putting peoples time to good use and every aspect of the app is beneficial. It’s amazing to see how technology can be used in such a productive way and gave me a deeper understanding of the importance of user generated content.

I have no doubt that I will be able to use the crowd-sourced initiative in my own works in the future. As long as you have a user friendly and interactive design there are endless ways to use this invaluable tool. I have a strong passion for all aspects involving social media and using it as both an aid for providing information as well as a platform for digital marketing. MapSwipe primarily provides vast amounts of knowledge for good cause and is beneficial in so many ways. For medical aid especially, knowing a basic structure of an area through these maps can save lives.

After a lengthy amount of my time being wrapped up in MapSwipe and researching the background alongside the future plans for them I started to look into the other aspect of the task HOTOSM. The Humanitarian OpenStreetMap Team. Initially as I began to research it they seemed to hold extremely similar ideas as MapSwipe in that they are a worldwide non-profit organisation originally from the US. They focus on how valuable it is to have free, up-to-date maps when relief organizations are responding to disasters or political disasters (https://www.hotosm.org/about). My first impressions were that it was notably less user friendly and took a longer to gain access and begin mapping where as MapSwipe took only a matter of minutes. I was intrigued to learn about how the Team at OpenStreetMap are trying to develop new technology to serve the humanitarian and open data communities which is something I would be very interested in. I got the impression that it was a much bigger company and is well established. I read into a small bit about the organisation and the structure within the community which helps me form a better understanding. Overall the ideas carried through both MapSwipe and HOTOSM are very admirable and everything about both is purely beneficial to everyone involved. 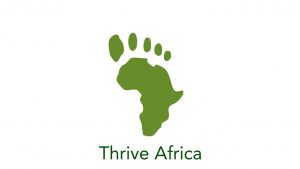 As a volunteer myself I have worked with Thrive Africa, St.Vincent de Paul as well as SUAS as a literacy support mentor. I am very aware of how much work is involved as a volunteer and how essential it is for as many people to be involved in projects like this to give as much support as possible. I have been to Ghana and Botswana with Thrive Africa and understand completely how much help is needed in various areas over there and was delighted to contribute anything I could on my side using HOTOSM and MapSwipe. I have no doubt that even small amounts of mapping helps enormously. As well as this side of the projects, I have also learned a huge amount about the importance of user generated content and how technology is enabling us as a DH community to put our time to good use. This excites me enormously for my future as I further my studies in Digital Humanities.

Throughout these past number of weeks, I must admit I thoroughly enjoyed learning a huge amount about these organisations. I have huge admiration for the work involved in projects like this. It’s amazing to see how useful technology can be when put to good use. For me personally, the ideas behind both HOTOSM and MapSwipe are the pinacol of the positivity that can be brought about through Digital Humanities. It has opened my mind to how grateful I am to be part of this community and excites me enormously for the future.

The Software Society: Labour And The Cognitive Economy